The Great Comet of 1812 on Broadway

The Great Comet of 1812 on Broadway

War and Peace and electropop

Making light of Tolstoy’s story in the opening song, the cast tells audiences to pay attention, “cuz it’s a complicated Russian novel, everyone’s got nine different names.” Thankfully, director Rachel Chavkin’s production streamlines that. The opera’s plot concerns only a fraction of the story from Tolstoy’s original 1,200 page novel. While her fiancé Andrey is off at war, Natasha falls in love with the dashing Anatole in Moscow. Her emotions muddled, she must now choose how to proceed, incidentally affecting the rest of the characters.

Brittain Ashford plays Sonya, Natasha’s loyal cousin. Gelsey Bell returns as Natasha’s strict godmother, determined to block any dealings between her and Anatole, played by Lucas Steele. Amber Gray shines again as Hélene, Anatole’s tart of a sister, who flirts and schemes constantly. She’s married to Pierre, who’s played by Josh Groban. Despite having a titular role, Groban spends most of the time in the orchestra pit, drinking his depression away while the other characters flit about. Denée Benton leads the cast as Natasha (a role originally played by Phillipa Soo of Hamilton fame). Benton’s Natasha is more naïve than Soo’s, singing with youthful assurance even as her life’s stability crumbles.

Onstage seating places 200 audience members in the middle of the action, as cast members move around the seats, often singing directly to star-struck guests. In most numbers as well, the cast enters the main audience section as well, with dances occurring in elevated orchestra aisles (a lá Lion King) and up in the balcony. Pro tip: For the best views, sit in one of the first rows of banquette seats for eye-level views (in red on the map below). For the most interaction with the cast, sit at one the on-stage tables in the back center of the stage between the banquettes (in yellow below). 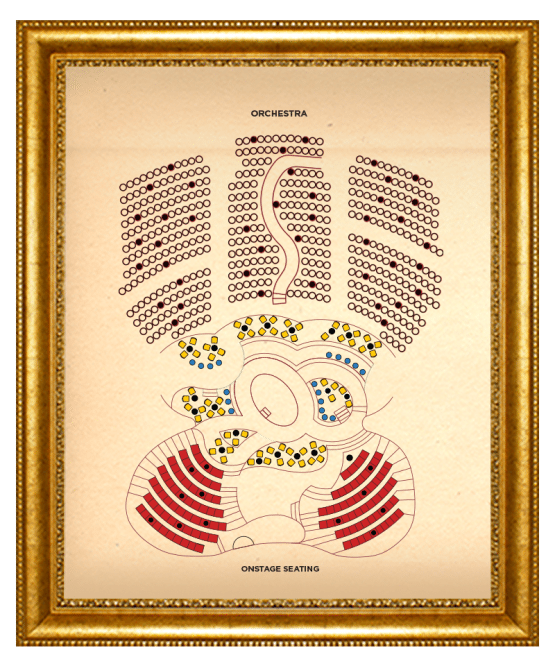