Why to see Diane Lane in The Cherry Orchard on Broadway

The Cherry Orchard, Anton Chekhov’s great play from 1904, is back on Broadway. And while catchy musicals such as Hamilton, Waitress and the always-popular Lion King get most of the attention, it’s in more intimate plays where acting talent and the nuances of theater truly shine. Nowhere is that more the case than with this new Roundabout Theatre Company production of Chekhov’s masterpiece. Here is why you should see The Cherry Orchard on Broadway this season.

Why to see The Cherry Orchard on Broadway

The Cherry Orchard centers on a pivotal summer in the lives of an aristocratic Russian family. After several years abroad in Paris, bohemian matriarch Ranevskaya returns to her beloved countryside estate—just before it goes to auction to pay the mortgage. Although seemingly desperate to save the estate, she and her family ignore attempts by a newly-wealthy friend to help save it, albeit at the cost of selling a famous cherry orchard. It’s a definitely Russian story about a falling oligarchy and a rising middle class after the abolition of serfdom.

And yet, in this new adaptation from Stephen Karam, The Cherry Orchard on Broadway suddenly becomes American. It still takes place in Russia, but the script (and the accents) make it relatable to 21st century audiences from the U.S. Karam wrote last year’s Tony-winning play The Humans, and has a potential new winner in this new script.

Diane Lane is enthralling as Ranevskaya 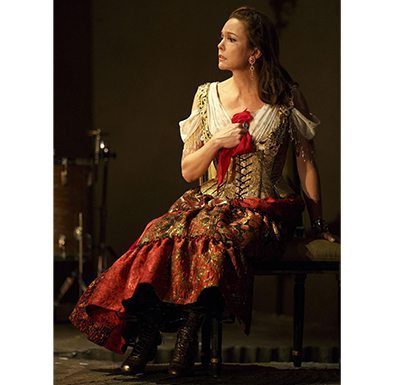 Oscar-nominated actress Diane Lane (you know her from Unfaithful and Under the Tuscan Sun) is phenomenal as Ranevskaya. Her vocal inflections add a depth to the hauntingly comedic script, and she fully embodies the outwardly strong, inwardly heartbroken matriarch. Little surprise that she seems so comfortable in the play—Lane acted as an ensemble member in a 1973 production of The Cherry Orchard alongside Meryl Streep.

Joel Grey is a hilarious Fiers

Joel Grey, an Oscar, Tony and Golden Globe-winning actor, plays the aged manservant Firs. His mutterings and half-baked musings on the plight of contemporary society reinforce Chekhov’s point that the “Old Order” is truly old and decaying. Grey, who rose to Broadway fame as the original Master of Ceremonies in Cabaret, plays the poignant character with perfect deadpan humor.

The Cherry Orchard is tragicomedy at its purest

Chekhov wrote The Cherry Orchard as a comedy, but its first director in Moscow interpreted it as a tragedy. Since that first production, directors have gone back and forth with how they present the story. In this new production of The Cherry Orchard on Broadway, director Simon Godwin is ambivalent, and expertly showcases the play’s duality. Audiences walk out disturbed, for sure, but not entirely sure whether it’s a happy or sad ending.

The Cherry Orchard on Broadway opens October 16th at the American Airlines Theatre. For tickets and information, visit the Roundabout Theatre Company’s website.