Not all theater in NYC is up in Midtown. And while visitors to New York often think the hottest new shows with the best talent are on Broadway, Off-Broadway theater can be a refreshing surprise. Since March, the West Village’s intimate Barrow Street Theatre has been thrilling audiences with its up close and personal take on Sweeney Todd: The Demon Barber of Fleet Street. Here’s why to see Sweeney Todd in NYC.

A rarity among theater, let alone musicals, Sweeney Todd’s protagonists are villains—though not without hearts. The demon barber is Sweeney, who’s returned from wrongful imprisonment Australia and hopes to find his wife and daughter. A wretched pie shop owner, Mrs. Lovett, recognizes him, and informs him that his wife has poisoned herself after the judge who’d exiled him attacked her, and that the same judge is now the guardian of his daughter. Obsessed with seeking revenge, Sweeney vows to kill the judge, and rents a room from Mrs. Lovett. But before he gets to kill the judges, other bodies pile up, and suddenly Mrs. Lovett’s pies transform from “the worst pies in London” into something juicier. Who’d have thought you’d be rooting so hard for a serial-killing duo of cannibals?  It’s dark. It’s gory. And it’s totally different from any other show onstage. (The original 1979 production all but swept the Tonys, winning eight awards.) 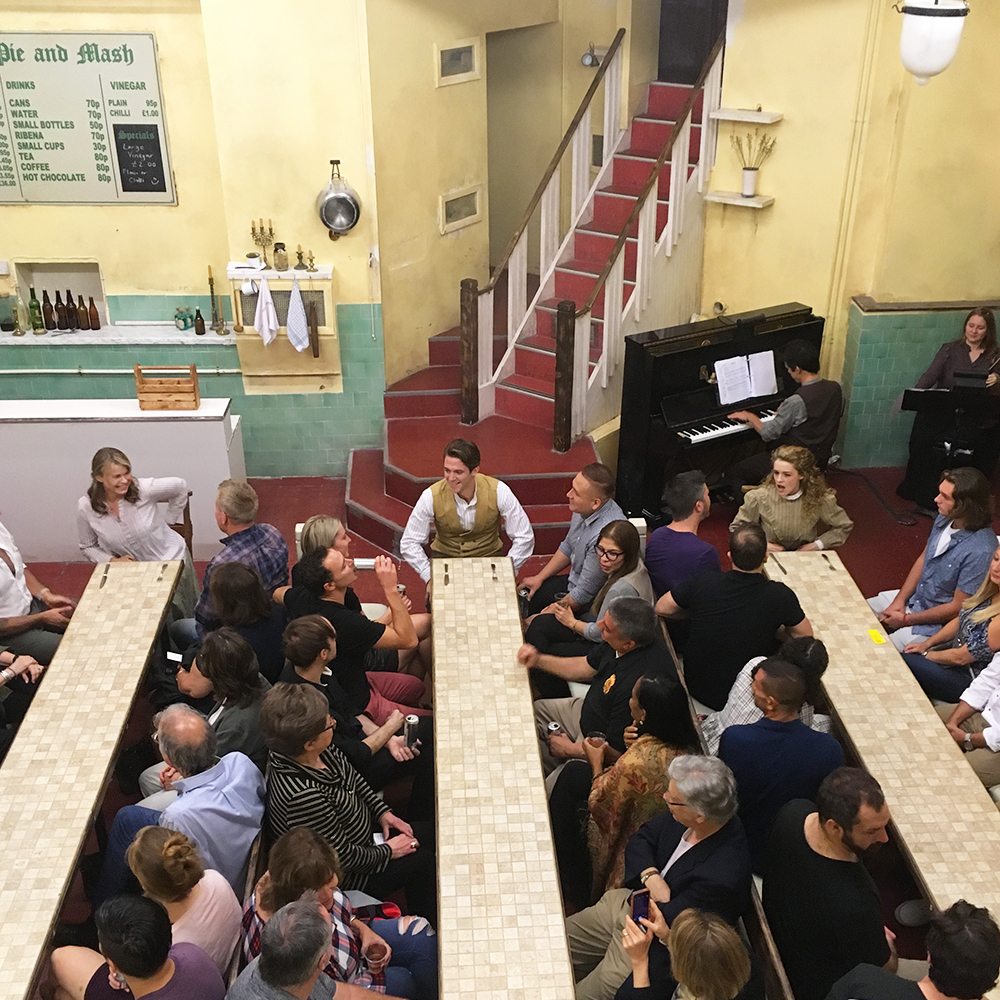 It’s Not a Traditional “Theater”

It’s been a long road for this production to land at the Barrow Theatre. In 2014, the Tooting Arts Club took over Harrington’s Pie and Mash Shop, London’s oldest, staging the show there in the 1908 café for six weeks before moving to the West End. Three years later, the Barrow has transformed itself into “Harrington’s,” with tiled walls, a shop counter, and rows of tables for unsuspecting patrons (i.e. the audience). Theater-goers can also choose to purchase tickets that include a pie dinner, from former White House executive chef Bill Yosses, no less. It all makes for an engrossing experience that’s wholly transportive.

It’s Up Close and Personal

Unlike the original Broadway production, this revival brings the action into the audience. A three-piece band plays to the right while actors dance and sing—without microphones—directly in front of you. Even from the gallery, one flight up, you can see the actors’ facial expressions as you never can on Broadway. Expect the actors to directly at you, sit with you, and run past you on the tables. And after the show, there’s no mad rush by the stage door. Instead, actors walk out through the lobby, speaking with those who’ve waited and (as seen in the photo above) signing playbills.

And speaking of actors, these are no slouches. You may have seen Hugh Panaro (dark and brooding as Sweeney Todd) in one of his 2,000 turns as the Phantom on Broadway. He’s also played Raoul in Phantom, as well as the original Marius in Les Mis. Three-time Tony nominee Carolee Carmello, a phenomenal Mrs. Lovett, is also a Broadway veteran, having appeared in 14 shows—including the original casts for Finding Neverland and Parade. The supporting cast is equally talented, and Jake Boyd is especially good as Anthony Hope, the young, naive friend of Sweeney’s who falls in love with Johanna, his daughter.

Tickets are available for Sweeney Todd from the Barrow Theatre through February 2018. After the show, it’s a quick ride back to 42nd Street where you can enjoy post-theater drinks and light bites at The Knickerbocker.