Ten Things You Didn’t Know about the NYC Garment District

The New York City garment and fashion industry has nearly two centuries of history, since its inception in the early 1800s. The neighborhood is a thriving tribute to this history, and though Manhattan’s hub for the clothing manufacturing has migrated—from the Lower East Side, to the blocks between 14th and 23rd streets—over the years, its current location in Midtown Manhattan is just as storied and iconic. Here are ten things you didn’t know about this fascinating neighborhood, the NYC Garment District.

In the mid-1800s the garment industry grew faster than any other industry, bolstered by the invention of the sewing machine and demand for inexpensive clothing. It was only natural for clothing production to blossom here, since New York was the largest textile storage site in the country. When mass-produced uniforms were needed during the Civil War, the government turned to manufacturers in New York City.

It used to extend to 42nd Street

Today, the Garment District is located between 34th and 41st Streets, west of 6th Avenue. Although the area doesn’t go quite as far north as 42nd street, in its heyday 42nd Street was a main artery of activity. The area was a magnet for unsavory activities like gambling and brothels and was known as the Tenderloin.

It almost went to 5th Avenue, but locals said no 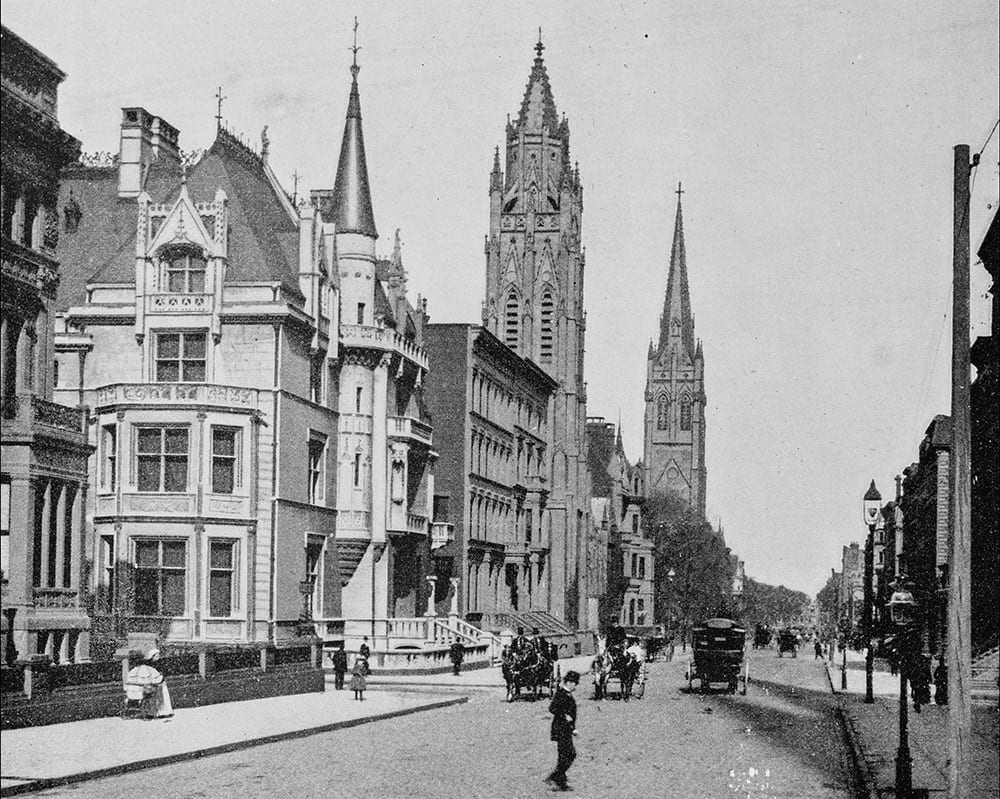 In the early 1900’s the Fifth Avenue Association launched a campaign to keep Fifth Avenue (pictured above) free of production lofts and the smoky, unpleasant businesses typical of manufacturing areas. The well-to-do endeavored to preserve Fifth Avenue as a glamorous, high-end boulevard and keep factories from creeping further and further uptown. A zoning law both intimidated manufacturers and encouraged the Garment District to move into the Tenderloin, since houses of ill repute were mostly in small brownstones, and sewing companies required big, open spaces for their businesses.

The lofts built in place of typical brownstones were devoted to manufacturing rather than living. The high ceilings allowed room for big machinery and large windows let in fresh air for workers, and to keep the clothes free of pestilence.

The industry still employs over 10,000 workers

Today, dozens of businesses in the area are devoted to the business of fashion, from designing, to production, to merchandising, and manufacturing alone employs around 11,000 workers.  You’ll find shops of accessories, buttons, beads, lace and, of course, fabric: Mood Fabric Store, of Project Runway fame is located on 37th street.

The Garden District is an outdoor art museum 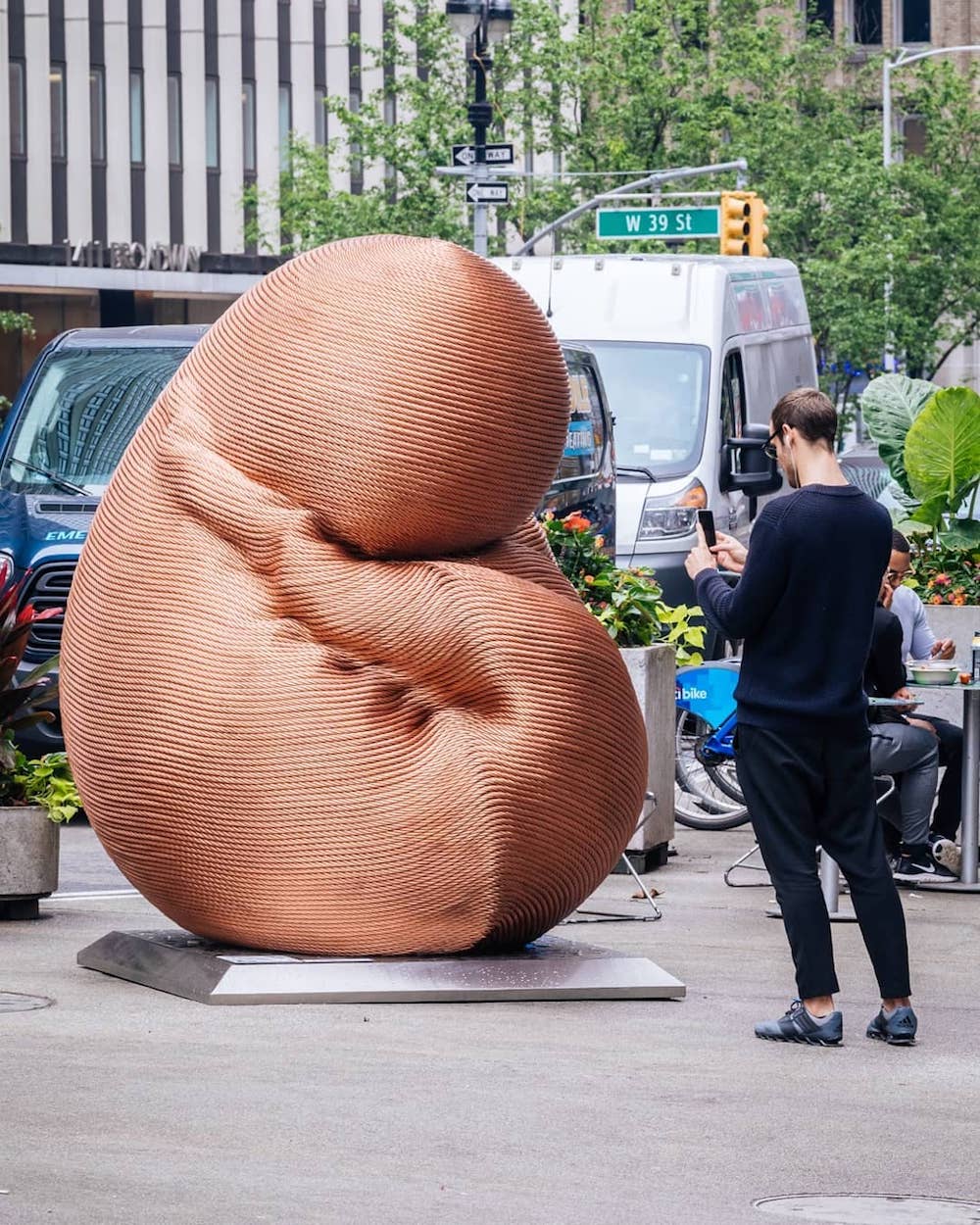 The District’s art program brings art installations from world class and local artists to the heart of the neighborhood. Since 2010, giant sculptures have graced the outdoor landscape in the Garment District Plazas, on Broadway between 36th and 41st Streets. The latest installation, Rebirth, is a series of embryonic sculptures by Taiwanese artist Kang Muxiang (pictured above). 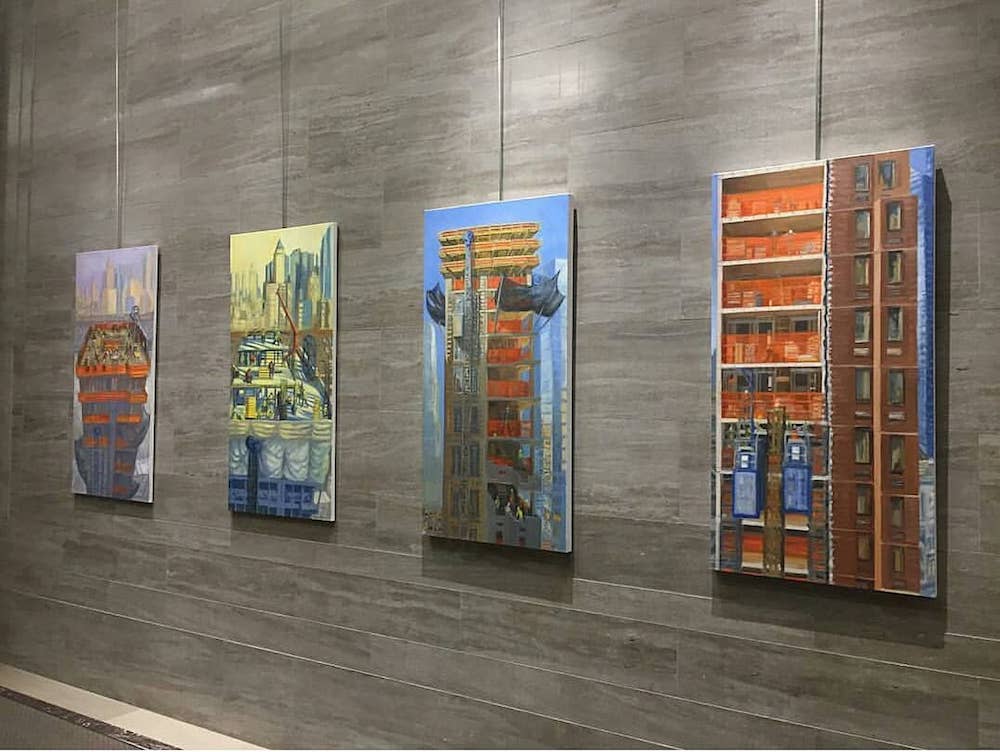 The Kaufman Arcade between 35th and 36th streets is a hallway decorated with the work of local artists as part of the Garment District’s public art program. Anyone can enter, and should, to see works like Gwyneth Leech’s depictions of the enormous construction works and revitalization of the West Side.

You can tour it

There are two-hour tours of the district every day, and free tours planned throughout the year, for a full historical picture of the area and the garment and fashion industries.

550 Seventh Avenue is known as the centerpiece of the Fashion District. Many famous designers, like Donna Karan and Ralph Lauren (who still holds property there) had their fashion houses and graciously appointed showrooms in this building. It is one of the reasons 7th Avenue is known as Fashion Avenue throughout the District.

Look down: There’s a Fashion Walk of Fame

You can stroll the Fashion Walk of Fame to learn about the American designers who made the Garment District a world fashion capital. See names like Calvin Klein, Donna Karan, Oscar de la Renta and Bill Blass on bronze plaques embedded in the sidewalk along Seventh Avenue between 35th and 41st streets.