Most drinks come and go. Their existence may last for a week or a season or even a few decades as a trend. But few stand the test of time, enduring through generations, and fewer still have held their prominence through three centuries. But the martini has.

The curious martini. One mention recalls the long slender stem, the wide brim with an olive tucked into it — or not. The martini is so famous, so ubiquitous, that it even has its own glass. The drink’s illustrious past is riddled with origin stories, which you will find at the drop of a hat on any of hundreds of libation blogs and national news outlets.

With name changes—did it start as the Martinez?—and liquor changes—the evolution of gin and vermouth themselves contributed to the drink’s evolving popularity—it’s hard to pinpoint which is the true original. One of the widely accepted histories is that the first dry martini began right here at The Knickerbocker in 1912, when hotel bartender Martini di Arma di Taggia reportedly served a drink made of London dry gin and Noilly Prat vermouth to the one and only John D. Rockefeller. It may be impossible to verify, but thanks to David Wondrich’s research for Daily Beast, we can at least rest assured that New York lays claim to the first martini. 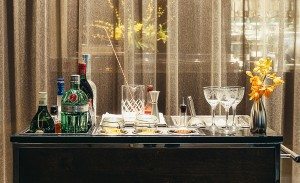 What is it that has captured the tastes of 19th century gold rushers, mid-century flappers and Mad Men, fictional British secret agents, and 21st century entrepreneurs? Perhaps it’s the debate itself. Varying proportions and preparations are as famous as the drink. Would you like a one-to-one ratio or should the bartender simply “look towards Italy” with the vermouth? “I’ll have mine shaken not stirred.” Blasphemy! The cocktail should never be shaken. And don’t even get us started on the dirty martini. If one thing is true, the life of the gin martini has certainly never gone unnoticed.

With a genderless cache that comes in one distinct package and can be tweaked to personal tastes, the martini has everything a gentleperson wants in a drink: a strong dose of booze and class. We will always love the martini.

How to Make the Original Martini

Want to make an authentic martini? Check out our in-house recipe for the perfect martini.