Frozen on Broadway, And We Can’t Let it Go

Do you want to build a snowman? New York audiences are answering a resounding “Yes.”

At a recent preview showing of Frozen, the sold-out Broadway theater erupted in joyous screams, “oohs,” “ahhs” and even tears throughout the glossy new production from Disney. Here are the big takeaways from Frozen on Broadway. 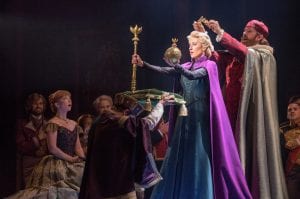 The Plot Grows Up

The animated film Frozen smashed records when it took the world by storm in 2013, earning over a billion dollars in the process. Knowing they had a solid foundation to build upon, the film’s creators didn’t reinvent the wheel when they transformed it from screen to stage. Like with  Anastasia, another musical based on a popular children’s movie, the team behind Frozen did have to choose which elements to carry over though. For its stage adaptation, Anastasia left out the major villain—along with his bat sidekick—from its animated inspiration. Frozen played it safer, although there are several welcome edits. The film’s bizarre snow monster and random wolf attack scene are both gone, for example. And ice trader Kristoff’s friends aren’t trolls anymore. Instead, they’re “hidden folk,” based on the “huldufólk” elves of Scandinavian folklore. (Fans of the movie will be happy to know that Sven, Kristoff’s silent but hilarious reindeer, and Olaf, the talking snowman, both remain. Do they add anything to the plot? No. Does anyone care? Not at all.)

It Stays True to the Film, While New Songs Add Depth

By extending its length and nearly tripling the number of songs, composers Kristen Anderson-Lopez and Robert Lopez give us plenty of new opportunities to dive deeper into the characters. New music adds increased layers to Elsa, the young princess of Arendelle whose fear of her own magical powers leads her to shut herself off from her younger sister, Anna. In Act One’s “Dangerous to Dream,” (see video below) she voices her desires to open up to Anna and the kingdom. “I can’t show you I’m not as cold as I seem,” she says. “A queen can change the rules but not the reasons they’re in place.”

Gentlemen Get a Boost, too

Elsa isn’t the only character to get more love in the Broadway version of Frozen. Hans, a prince who quickly plants himself as Anna’s love interest, has two new songs that hint at his motivations, and Kristoff finally has more to sing than a silly lullaby to his reindeer.

The staging and lighting of Frozen are as close to magic as we’ve seen on Broadway. Frost spreads across the proscenium arch, capes and gloves go flying, hearts get struck by jets of ice, and staircases and bridges appear. The combination of lighting and set production wizardry had our audience gasping. 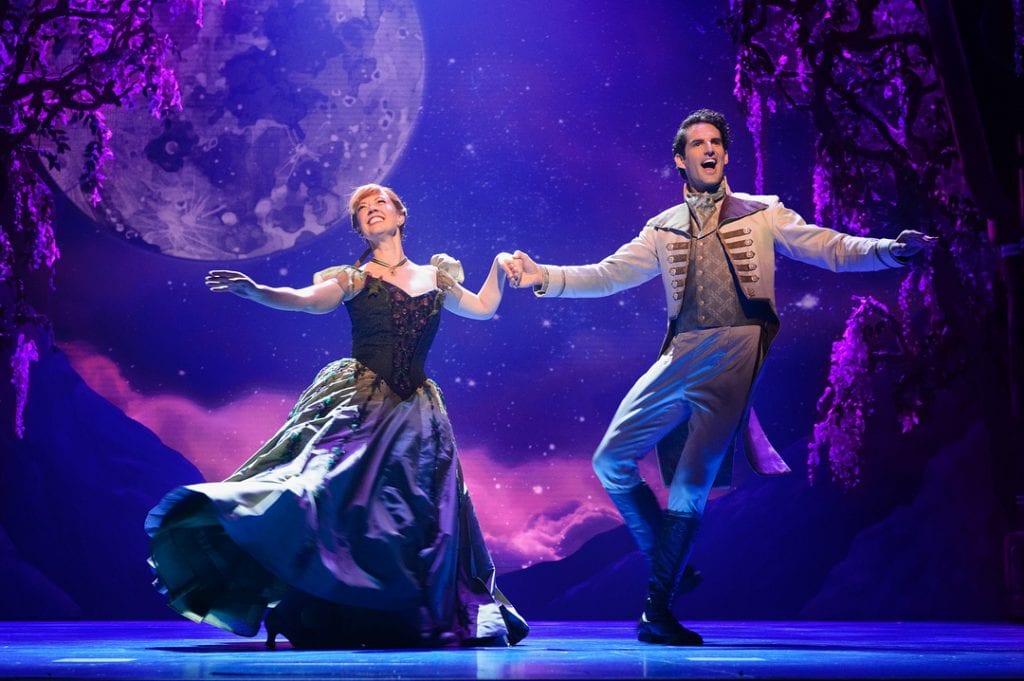 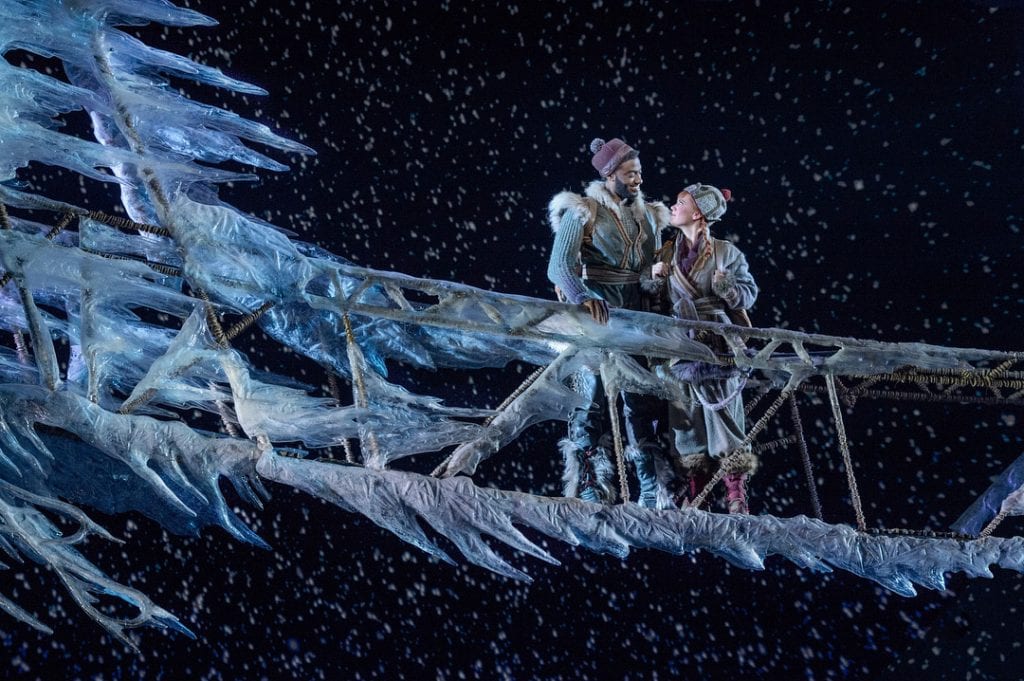 Frozen Broadway’s ice bridge with Anna and Kristoff. Via @frozenbroadway

Caissie Levy, who plays Elsa (and has a powerhouse of a voice perfectly suited to belt out “Let it Go”), and Patti Murin, who plays the confident and optimistic Anna, aren’t just sisters in the show. Although they had only met casually before Frozen, the two women have since become close friends, thanks to complementary personalities and similar experiences with failed pregnancies. At one point, in the show, Hans asks Murin’s Anna whether she’d like a family, to which she replies “very much.” Murin tells The  Times, “There are some nights when it really hits me, not in a sad way, but I feel it so viscerally every time…It’s never a tough moment, but it’s always an emotional one.” The two onstage sisters are constantly texting between shows, which makes their performances all the more visceral.

How to See Frozen on Broadway

Frozen the musical is playing at the St. James Theatre, just a five-minute walk from The Knick. Join us before or after the show for cocktails at St. Cloud Social, our rooftop atop Times Square. For more information, ask The Knick’s concierge for help with tickets, or reserve from Frozen on Broadway’s website.