This past month, chef Adin Langille joined the Knickerbocker, serving under Charlie Palmer in the hotel’s restaurants and bars. Langille brings a lot of new talent to the table. He and Palmer are working on new menus, bringing a new direction to St. Cloud’s dining options and planning ahead for other seasonal changes as well. 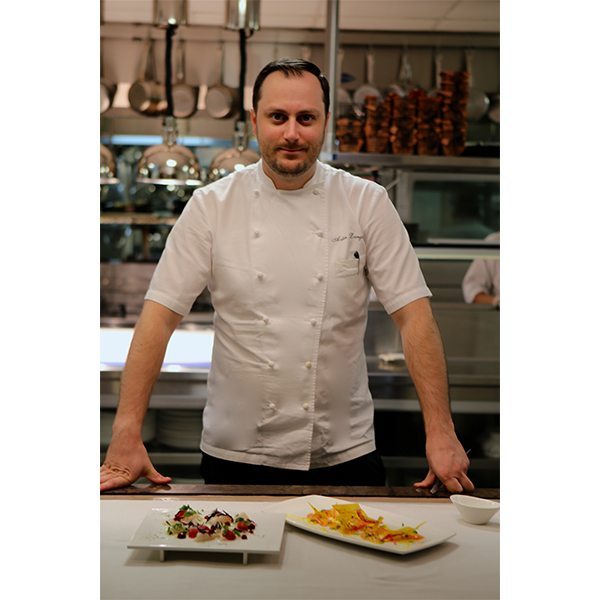 During a break from the kitchen, we met up with Langille in the lounge of Charlie Palmer at the Knick.

How did you become a chef?

I started cooking with my mom when I was young, growing up in southwestern New Hampshire. She’s an artist, and I was always into art and sculpture. When I was fourteen I got a job washing dishes at a local restaurant. I just saw working in the kitchen as a job, but junior year of high school my mom made me do a youth program at Johnson & Wales’s Culinary Arts school. I saw a dish plated by a chef, and realized that you could use food as a medium for sculpture. That’s really what got me into it.

Is there a food fad you’re loving right now?

The poke fad. I had it on the menu last year, and I’ve seen it popping up all over the city now. It’s the raw fish salad that’s super fresh, light and healthy—and tasty. I dig that.

Are there any food fads you can’t get behind?

The ramen burger. Don’t mess with the burger: American cheese, bacon, a flavorful sauce and a good bun. That’s it.

What’s your most memorable meal?

This summer I was in the Dominican Republic with my wife, and I caught a mahi mahi near Punta Cana. We went up in the mountains to Jarabacoa, where my wife’s uncle has a house. It’s a full on jungle up there, on the grounds and in the woods we found lemongrass, banana leaves and habanero peppers. We took the mahi and did a yuca coconut puree, wrapped the fish in banana leaves and steamed it. We also got a roast pig from a farm down the street. I’d say that 90 percent of what we ate for dinner we acquired from fishing, foraging, or that farm down the road. We drank a magnum of Barbera d’Asti wine and capped the night with Cuban cigars. It was unreal.

Are there any ingredients you won’t touch?

Liquid smoke and truffle oil. Truffle oil is almost all synthetic, and if you want smoke flavor, actually smoke the food.

You’ve lived in New Hampshire, Providence and Miami. What do you like about living in New York City?

I love the diversity. There’s so many different restaurants you could eat at, so many places to go food shopping. Whatever you have a craving for, you can get it. There’s always a new restaurant and it never gets boring. You think you’re sick of it, but then you go to another city…and realize that we just do food so much better here.