There are more than two dozen major productions at Broadway theaters in New York City right now — and that doesn’t even count off-Broadway shows or those still in the pipeline.

If you haven’t already seen them (or don’t mind seeing the same show twice) some of New York City’s best-loved shows are still on view: Hamilton, for example, has been one of New York City’s biggest theatrical attractions since it debuted in 2015 at the Richard Rodgers Theatre.

Whether you want to try your luck in the cancellation line, hunt for discounted tickets at the TKTS booth in Times Square or you’re willing to splurge for the perfect seats in advance, these are the five best shows to see in New York City in 2020.

Start with a Show-Stopping Meal…

Prepare to be dazzled before the curtains go up! Charlie Palmer at The Knick is the perfect place to start your evening at theatre. Guided by Chef Palmer’s passion for market-driven ingredients, our Pre-Theatre Dinner Menu draws upon the local bounty of the Hudson Valley and North Atlantic with selections ranging from our  Wild Mushroom Barley Risotto to our 24-Hour Braised Beef Cheek.  Pair your dishes with a glass from our diverse wine selection to give your meal the ‘standing ovation’. The proximity to the theater district makes Charlie Palmer at the Knick the  quintessential destination for pre-theater dining. 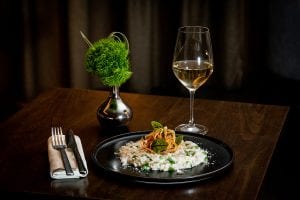 Debra Messing, of “Will & Grace” fame, returns to Broadway as the star of this poignant play, which traces one woman’s life from the age of 17 to 101 over the course of her birthdays. Reviews from the play’s original staging in Detroit were stellar, and playwright Noah Haidle uses birthdays and baked goods to ask unanswerable questions about the cosmos and our roles in the universe. Performances begin on April 2 at the American Airlines Theatre on 42nd Street.

Trust us, you’ll want to venture across the bridge to Brooklyn to see this contemporary reimagining of Medea at the Brooklyn Academy of Music (BAM). Loosely based on the tragedy by Euripides, the brief U.S. premier stars real-life celebrity couple Bobby Cannavale and Rose Byrne. See it now, before it closes on March 8.

You’ll have to wait until fall to see The Music Man return to Broadway — but with Hugh Jackman reprising the role of con artist and Professor Harold Hill, we’re sure it will be worth the wait. See Jackman and Tony award-winning Sutton Foster, among others, recreate the story of a fraudster who sells instruments and uniforms for a boy’s band, promising to bring music to the city. Meredith Willson’s unforgettable, toe-tapping tunes will fill the Winter Garden Theatre in October.

Previews for one of the the best-loved musicals on Earth began in December, and these are not the Jets and Sharks you remember from the 1950s. New avant-garde choreography and a reimagined costume design will bring new context to the classic, aided by fresh performances from more than 30 actors making their Broadway debut. Oh, and if you just can’t get enough of this Shakespeare-inspired tale, Steven Spielberg is bringing a reimagined movie to life, scheduled for release in December of this year.

At once hysterical and incredibly moving, the story of Mrs. Doubtfire — a father who dresses as an elderly Scottish nanny so he can stay with his children even after losing custody — has been transformed from a comedy film starring Robin Williams into a major Broadway musical, this time with the titular character portrayed by Rob McClure. Previews begin on March 9 at the Stephen Sondheim Theatre.

After your run, there’s so much more to explore in New York City. Check out our NYC Travel Guide for recommendations on where to eat and what to do here in New York.