It can be difficult to keep up with your workout routine when you’re on the road, even though guests at The Knick have access to a 24-hour fitness center. But sometimes, the best way to get moving is by exploring Manhattan while hitting the pavement and turning your sightseeing into a high-octane run.

There are a dizzying number of excellent running routes criss-crossing Manhattan guests can easily access from The Knick, and there’s no better time of year than now to get outside and enjoy the city’s sights and streets. Serene water views, inspiring architecture and exciting neighborhoods will keep your feet in motion as you walk, jog or sprint around the city.

Whether you want to break a sweat on your way to brunch or are training for your next marathon, Manhattan’s top running routes offer challenges for any level of athleticism, as well as the opportunity to discover the Big Apple along the way. Pack your water, download your favorite playlist and don’t forget your Metrocard — just in case the scenery draws you farther than a manageable return trip.

At just over 2 miles, take this run to acclimate to the city streets. The route heads east along 42nd Street all the way to 1st Avenue, where you turn left at the United Nations. With its sleek glass façade and rows of global flags, the hub of diplomacy is a sight to behold on the city’s East River. Passing the UN on your right, turn left on 46th Street and continue until Vanderbilt Avenue, a short thoroughfare that takes you back to 42nd Street.

Broadway is a terrific avenue to travel by foot since it bisects the city and crosses through many different neighborhoods. Avoid its crowds above 42nd Street and head downtown on the historic street, which goes through Herald Square and past the iconic Flatiron Building. This route continues south to Union Square Park, where you have officially made your way “downtown.” Make your turn at the lower end of the park, past the city’s first Whole Foods, and back up along manicured Park Avenue before heading through all the wondrous possibilities of Koreatown on your way back to The Knick.

This is a great warm-up or beginner’s route to start your day. The path takes you through the greenery of Central Park’s west side and around the historical buildings of the American Museum of Natural History, before heading back to the hotel.  From the Knick, head west to 8th Avenue, then turn north to Central Park. Continue through the city streets and cross Columbus Circle to Central Park West. Continue about another mile along Central Park West until you reach the Museum of Natural History on your left. From there you’ll make three lefts to circumnavigate the museum’s landscape — on 81st Street, Columbus Avenue, and 77th Street. Take in the mid-nineteenth century architecture of the main building, as well as the modern glass cube of the Rose Science Center and new Gilder Center which is designed to look like a giant snowdrift and will open soon. Find your way back to Central Park West and follow the same route home.

The greenway runs along the east side of Manhattan from the Triborough bridge to Battery Park City, for a total of about 9.5 miles of waterfront running path. Since its construction, beginning in the late 1800’s, sections of the Greenway have been more developed than others, with some parts completely enveloping the FDR Drive, and others separated from the highway by quieting green space. On this NYC running route, you will find some of the best sections of the path by heading due east across 42nd or 41st streets, until you reach Robert Moses Playground just south of the United Nations. Turn right to head south on the Esplanade which runs east of FDR Drive. From here it’s smooth sailing for approximately 6 miles to the Brooklyn Bridge. You’ll enjoy sights such as New York City’s famed Water Club and the East River Park. Turn around whenever you please or from Brooklyn Bridge hop on a train to return to the hotel.

With our proximity to the Hudson River and its magnitude of greenery and development for athletic pursuits, you’ll want to head straight to the West Side Highway for this intermediate, one-way route. Pass through the new Hudson Yards and get a glimpse of the entrance to the High Line, as you enter this path that will take you past Chelsea Piers and the boating slips of Lower Manhattan. This route along the water is so beautiful that you will be energized all the way to the tip of Manhattan. Take a moment to enjoy views of the Statue of Liberty from the green landscape of Battery Park and then hop on a train back to Midtown.

Experienced runners will undoubtedly head to Central Park, the iconic location of the New York City Marathon finale. Endless trails wind through this idyllic natural space with a variety of terrain and difficulty levels, making Central Park one of the most desirable places to run in the city. This loop heads up 6th Avenue and then along the park’s Eastern Drive, circling around the Jackie Onassis Reservoir. There, runners have a soft surface with water and skyline views. On the way back, you will breeze past the front of the Metropolitan Museum of Art before heading down through running trails on the east side of the park, through the Central Park Zoo.

This run clocks in at just under 9 miles, and shows runners the full extent of Central Park. Head up Eighth Avenue to enter the park at Columbus Circle. Going up the west side of the park, mostly on the foot-friendly bridal path. Up by 101st Street, veer from the bridal path for the foot paths by The Pool, taking the uphill route to Great Hill, with epic city views behind you. Down from the hill, circle on the south side of the Harlem Meer before heading south to the beautiful (and usually crowd-free) Conservatory Garden. Continue on foot paths leading to the Jackie Onassis Reservoir, with its sweeping views of the skyline. Allow gravity to take you down the East and Center drives before retracing your steps from Columbus Circle back to Midtown.

Over the Bridges Running Route: 11.23 Miles

This route will challenge even experienced runners, but the views from two lower Manhattan bridges are worth the effort.

Take Broadway until it intersects with 5th Avenue, taking the leafy and elegant street down until Washington Square, passing through its marble arch. Turn right on Bleecker and then right again on Bowery. From there, it’s a direct route to the entrance of the Manhattan Bridge on the edge of Chinatown. Enter on the right side of the bridge, which is designated for foot traffic, and leave the city behind as you head to the next borough. The high rises of the Financial District will be on your right, as will the towers of the Brooklyn Bridge and Liberty Island.

Ahead, Brooklyn’s riverfront parks welcome you to the most populated borough of the city. Exit the bridge’s pedestrian path and continue south on Jay Street before making a quick turnaround on Tillary to head back across the East River, this time on the Brooklyn Bridge. Take in views of Dumbo to the right and the Financial District on the left, and the Manhattan Bridge on the right. Enter Manhattan by  City Hall Park, passing through the park and continuing straight on Warren Street until the West Side Highway. From there, take the riverside running path all the way to 42nd Street.

Need a significant challenge for your next run? Try a portion of the New York City Marathon route. For this run, you have two options from the Knick, both starting at Queensborough bridge, mile-marker 16 of the Marathon. For the north route, head due east across 42nd street to First Avenue and then north until you cross under the Queensborough. Now you are officially on the Marathon path. Continue north on First Avenue through Manhattan and Harlem until you reach the Willis Avenue Bridge. Cross the bridge into the Bronx to 135th street, and make a left. This is mile marker 20 of the NYC Marathon route. Follow 135th to Alexander Avenue, and head north to 138th Street. Turn west again here and cross Madison Avenue Bridge back into Manhattan. You have just crossed mile-marker 21. Now your route goes south along Fifth Avenue and into the Park, for the final five miles of the Marathon. At Fifth Avenue and 103rd Street, hop onto Central Park East Drive and continue to the southeast corner of the park. Turn west here and cross the south side of the park along 57th street. On the southwest corner, turn north again on Central Park West to 67th street, where you meet the finish line. You have just completed the final ten miles of the New York City Marathon! If that wasn’t enough to quench your running thirst, next time head over the 59th Street Bridge into Queens and then south over Pulaski Bridge into Williamsburg. Continue over the Williamsburg Bridge and back into Manhattan, where you can take any route back to the hotel. You have just crossed mile-markers 11-16 of the NYC Marathon.

REFUEL AFTER THE RUN 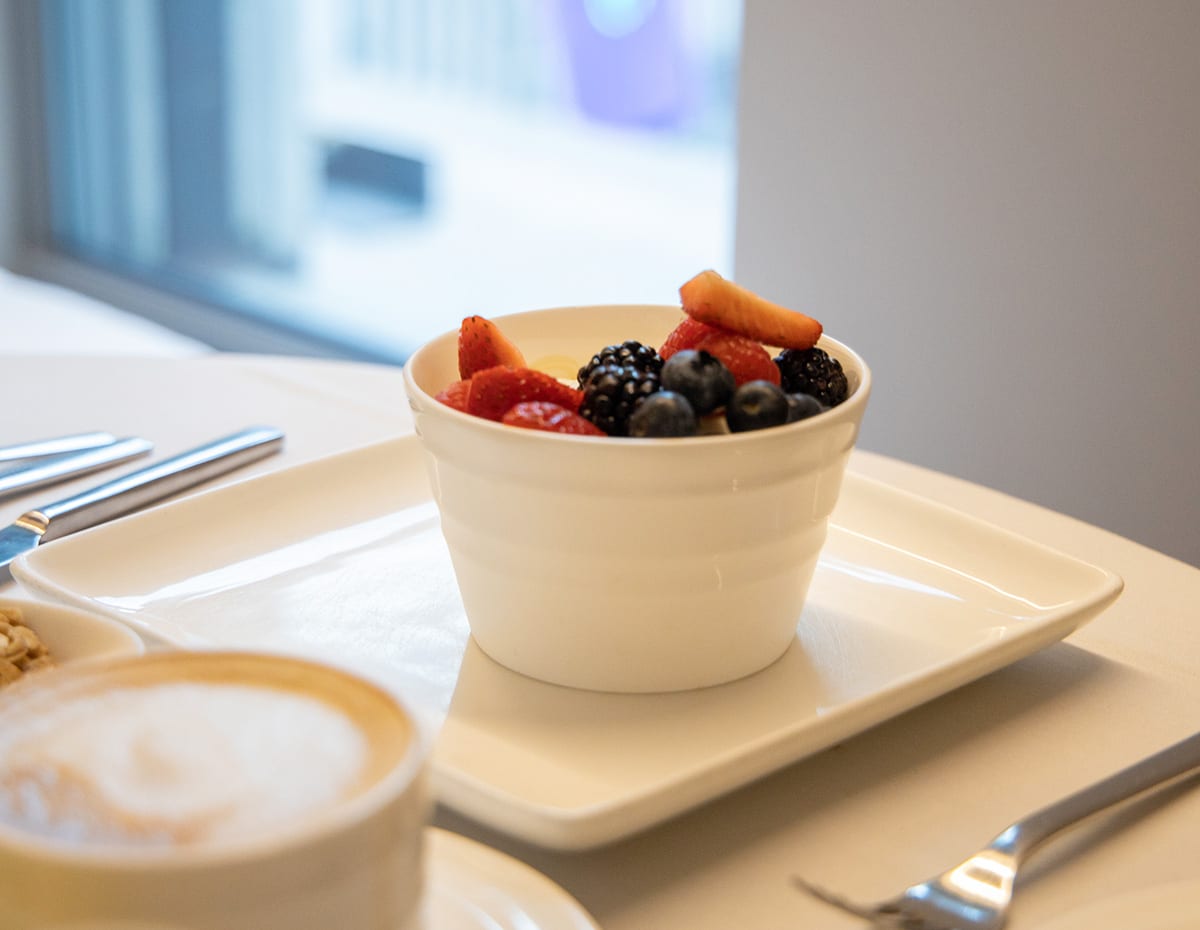 Fuel up before or after your run with a nutritious breakfast at Jakes @ The Knick, where morning menus feature healthful grab-and-go options such as an açaí bowl with Brazilian palm fruit, granola, banana, berries, shredded coconut and chia, plus a selection of pastries and La Colombe coffees.

After your run, there’s so much more to explore in New York City. Check out our NYC Travel Guide for recommendations on where to eat and what to do here in New York.

RESERVE DIRECT FOR EXCLUSIVE RATES Receive 2pm late check out and an upgrade, based on availability.