Central Park is one of the most famous parks in the world, and a paragon of urban park design. However storied it is, the park still holds secrets that even lifelong New Yorkers may not realize. We compiled a list of our favorites. Here, discover 10 things you (probably) didn’t know you about Central Park.

1. You can drink the waterfalls

At least five waterfalls exist in Central Park, all of them running with the city’s tap water. Coming straight from the Catskills to the park’s Onassis Reservoir, the clean water is technically suitable for drinking, although you’d probably get some strange looks.

Near the northern edge of the park, 38 woodsy acres with winding trails form The Rambles, one of the least manicured sections of Central Park. Hidden amongst the tree-covered hills of the Rambles is a small cave. On account of criminal activity associated with the hidden locale, the city sealed off the cave in the 1930s, but you can still see the stone steps leading to its entrance.

3. It used to be home to a thriving community of freed slaves

Before Central Park was Central Park, it was the site of a collection of small settlements, mostly for poor, Irish immigrants. One settlement, Seneca Village, between 81st and 89th streets on the West Side, was different in two ways. It was mostly for freed slaves, and it was a thriving middle-class community. Over 200 people called Seneca Village home, enough for them to meet the land requirement for voting. The city used eminent domain to raze the small town, making way for the park in the 1850s, giving residents money in return for their loss of land. Archaeologists conducted digs on the site in the early 2000s, unearthing remnants and dozens of artifacts from the lost town. 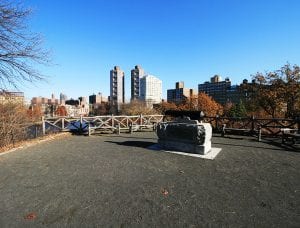 For Clinton, built in 1814, sits atop a hill at 107th Street. In 1905, the park began displaying a historic cannon—one that sank with a British ship during the Revolutionary War—on the fort’s grounds. It wasn’t until 2013, when the cannon was undergoing historical preservation, that workers discovered it was fully loaded, complete with a cannonball and gunpowder. They removed the gunpowder, but the cannonball stays.

5. There used to be a grand marble arch

As New York grows, some things are inevitably lost to history. One of the most beautiful: Central Park’s Marble Arch, which was the only one of the park’s many beautiful bridges to be built entirely of marble. It was demolished by Robert Moses to make way for cars in the park, and the pieces were buried underground. Rumor has it one of them has worked its way back to the surface in defiance, but we can’t reveal where.

In 1934, Central Park sealed off a corner of the park to see what would happen when they let nature take its course. The site, now called Hallett Nature Sanctuary, remained untouched for 74 years, when the Parks Department went back in to clear out invasive species and restore endangered populations. This bird sanctuary, located in the very southeast corner of the park, is now open daily. 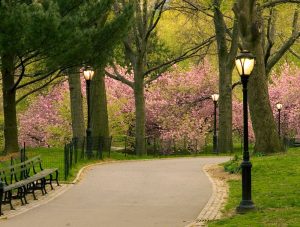 Before GPS-powered maps were ubiquitous, Central Park developers were faced with a huge task: How do you help people who are lost? One clever (and rather discrete) solution they came up with: a code on every cast-iron lamppost. Look for a metal plaque on the lamp’s base or the post itself. It will have four digits: The first two or three tell you the nearest cross street, and the last one tells you if you’re closer to the east or west side — odd numbers west, and even means east.

Central Park could use a lesson in women’s history: Though it boasts an impressive 51 sculptures, fewer than 10 of these sculptures depict women, and none of them depicts an actual, historical woman. Pay attention as you stroll through the park and you’ll see for yourself. This will all change, though, as two new sculptures are set to commemorate the centennial of women’s suffrage. By 2020, Susan B. Anthony and Elizabeth Cady Stanton will grace the famed Literary Walk.

One of the park’s more subtle attractions is the Shakespeare Garden, a four-acre plot featuring every flower and plant mentioned in the Bard’s oeuvre. Every bed of lark’s heel, wormwood and quince is marked with the pertaining quote. But another secret awaits: The garden also contains a bench that allows two people to sit at opposite ends and hear each other loud and clear.

Perhaps the most legendary Central Park secret, and the one New Yorkers take the most pride in uncovering, is the location of the survey bolts. When New York’s famous grid was laid out in the early 1800s, city planners placed bolts at the intersections of the impending streets. Central Park wasn’t yet planned, so there were bolts throughout land that would become the park. All of them have since been removed, save for one, which remains, unmarked, at the imaginary intersection of 65th Street and Sixth Avenue.